A Visit to The Mountain Light…

My Journey led me to The Pisgah Forest in Barnardsville, NC…to meet Michael Lightweaver, owner of The Mountain Light Sanctuary.

I had just returned from Pennsylvania…where T has had well over 4000 visitors and hadn’t charged a single penny for anyone wanting to stay for any length of time. So I wanted to chat with Michael to learn more about how the donation system worked for his sanctuary.  (Be sure to read My Spirit Animal Guides for more stories from The Mountain Light visit)

Michael started out with one acre, a single room log cabin meant for his getaway back in 1995. But Life had other plans for him and the property. He kept having visitors and it got to the point where he started expanding the main cabin and eventually building smaller shelters to accommodate his guests. He then got to the point where he started asking for donations to help cover the costs of maintenance. He asks for $35/person/night. You’re not going to find anything comparable for that price in the area. It is a donation…therefore not compulsory. But in the spirit of goodwill and karma…I don’t see why someone wouldn’t.
When you cross the bridge to enter the property, you sense or know that you’ve entered a very special place. I don’t know if you believe in fairies, elves, gnomes, etc. I do. And this was the second place that they came into play. The first was in a story T had shared with me that he had experienced. The second was here at the retreat. There is a very thin veil at The Mountain Light. You can feel the energy as you cross the bridge.  The video is of images capturing the Elf Lights or Spirit Orbs.
Michael and I talked for two hours about logistics. It was a very “business-like” style meeting…so my notes reflect this. We discussed insurance; the importance of a communal space versus a formal kitchen; fire and health department regulations…that sort of stuff.
He has a Work Exchange Program. One can sign up on his website. They don’t turn anyone anyway…but he limits it to 2 to 5 nights. He provides shelter, they provide labor. He gets most of his maintenance done this way.
The property is now 3 acres. He is hoping to purchase another acre behind the Zen Garden.
His funding comes when it is needed in one form or another.
He is very Buddhist in his way of life.
He has learned over the years to trust in Letting Go and Letting Be…that when you surrender, things take care of themselves and often at the right time it is needed.
We talked about Life steering/guiding us in our chosen destinies. About how even though we have one thing in mind, sometimes we need to surrender to the Higher Power and follow the path laid before us for the benefit of the bigger picture.
A another common theme from everyone I’ve talked to thus far is the concept of the external environment reflecting the internal. Michael brought this up, as did T. So of course we start talking about T.
And on his own, Michael compares him to Papa Bois. Papa Bois is also the name I gave to T. This is now the fourth time Papa Bois has come up in my journey. Papa Bois is a Trini folklore character. He is of French origins. He can be mistaken as a devil/a monster to those who mean harm or as a protector and guardian of the forests. He is akin to the Green Man, Robin Hood, Peter Pan, The Greek Pan, Khidr (of Islamic folklore). The first time I said Papa Bois during this journey, was when the Ambassador of T&T was giving his speech during Carifest. The second was when I was explaining local culture to someone else. The third was to T and the fourth was when Michael brought up the comparison. Michael has not been to Trinidad…but his wife teaches West African influences in the Caribbean at her university.
Michael suggested I check out his library as he had a lot of books on rustic shelters and traditional dwellings. The first book I picked up was Home Work: Handbuilt Shelter by Lloyd Kahn…the first page I opened it on was Bill Copperwaite’s Yurts 🙂

I gathered my things, placed my donation under the three gnomes in the kitchen…who take the energy of the donation and the paper goes to the bank 🙂 And took my leave. It was a very slow ride back to cell reception 🙂 because the road was covered with butterflies resting. There were hundreds of them…the whole way down…I may have squished a few 😦 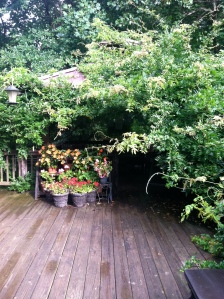 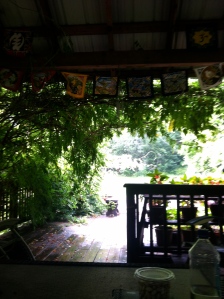 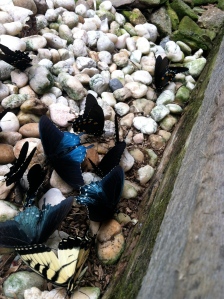